The legendary Portobello Market is synonymous with fashion and all things bang-on trend, so there was no better place to hold our West-side I Love Markets pop-up. It's reputation ensures a continuous flow of both tourists and locals, so all was set for a great day at Portobello Rocks!

Some may of feared the rain as it came down hard on Friday, but Saturday thankfully stayed dry and stall holders were protected by the Westway and hassle-free gazebos, so no worries there. Market visitors were immediately intrigued by the bunting and balloons and the stall holders were fabulous, so let the shopping commence!

The prize for one of the most aesthetically pleasing stalls has to be awarded to Haus Of Artisans.  Featuring products from three different artists. The passion and love for their products truly came across and they have been firmly placed on my Christmas Wish List to Santa! 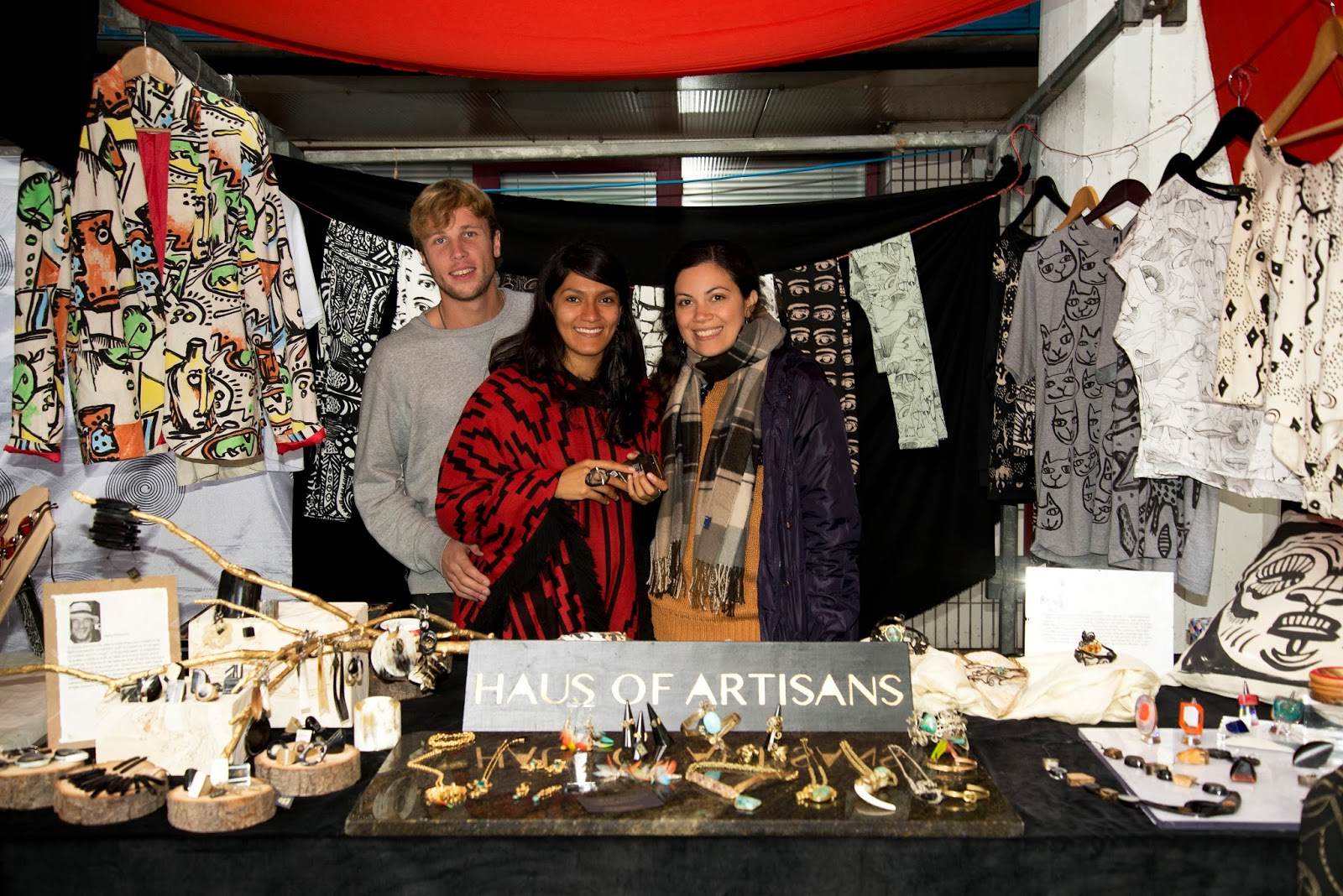 The Tie Doctor was there giving out some crucial neck wear advice to all the Potobello fashionistas. Sporting his own product and even selling out of his £8 Stylish black bow. He has hitting the right note.

Self confessed vintage lovers ourselves the ILM team were very happy to see such an eclectic mix of Vintage making an appearance.

Harper & Eye are definitely one to check out if you are a vintage lover, selling an awesome array of hand picked designer and high street apparel to suit any budget.
LFF Boutique also brought some statement customised vintage pieces along side her own branded womenswear and statement jewellery. Diana Vickers was recently spotted sporting her 'Boys Boys Boys' tee which you can get on the ILM Shop!


Love Vintage brought an aladdins cave of vintage treasures. Offering everything from gloves, handmade cards, prints, jewellery and accessories. She also put a smile on shoppers face with the vintage styled poster proclaiming "Your husband just called, he said buy whatever you want". We can dream...

Wunderbar Vintage was another big-hit, with masses of stylish picks from many different eras and the best collection of shoes we have ever seen! Katie from I Love Markets bought the embroidered oriental gown for £15 featured below, oh an also a great pair of sunglasses! 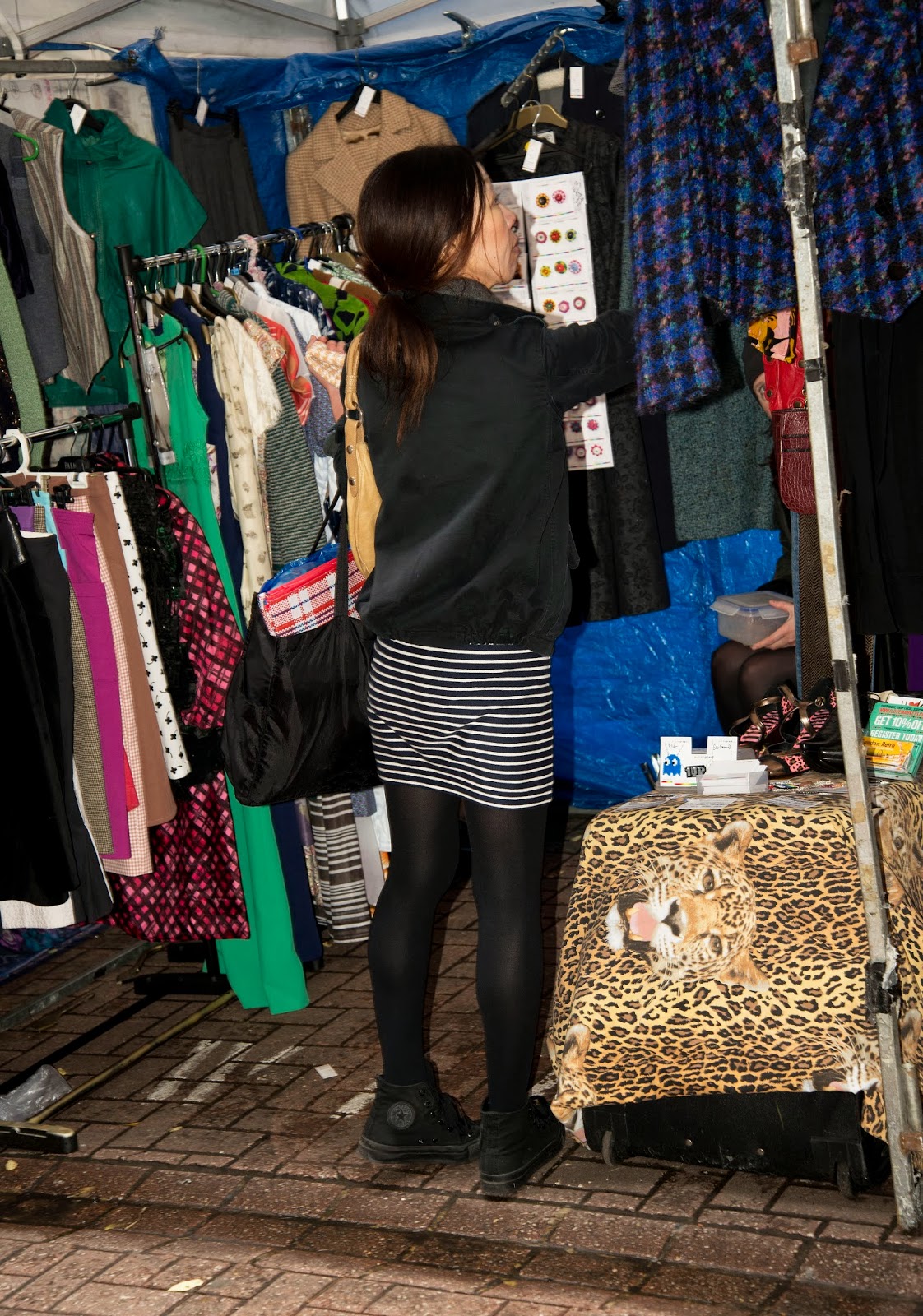 Retro Great also brought some vintage wonders and mixed it up nicely with some unique retro styled handmade jewellery.

The Golden Grass Company had one of the busiest stalls of the day with people fascinated by how these sophisticated, hand made, golden wonders start at around £10!


Acro Iris who normally trade in Camden traveled to Portotbello to showcase a large range of handmade products from leather flip flops to handmade charm bracelets. The bright colourful stall brought a ray of sunshine on a mainly cloudy day!

Another trader bringing the sunshine was of course Mixy Fandino. The beautiful handcrafted jewellery comes from the Colombian Andes. It is made from sustainable materials in an array of bright South American colouring, Mixy is always sure to stand out from the crowd.

Jerpurity with an extensive array of jewellery and accessories made using different African prints.

East End Prints brought a large selection of both framed and unframed prints. The animals prints seemed popular with the people of Portobello and if you missed out check out there extensive range on ILM. 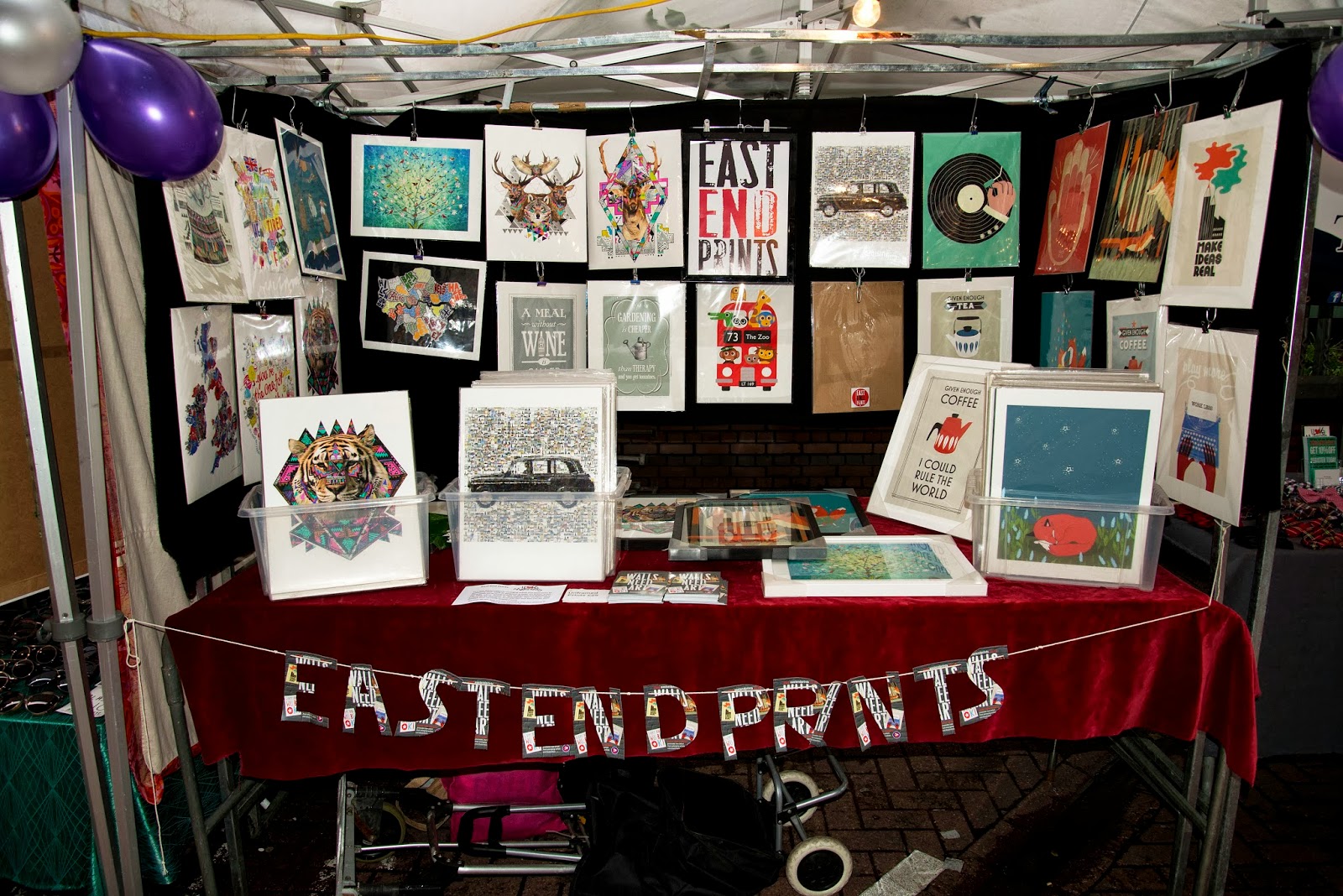 Innabox brought the smiles with their cute collection of unique cards and phone cases. 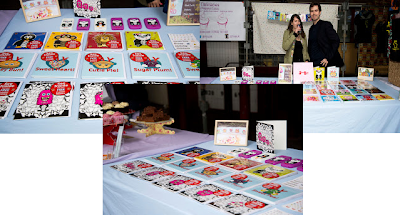 Open The Gate take African prints and street culture to create their products. Their hood seemed a popular option and Sandrine was keen to get the public trying them on! If you missed them lucky for you the stylish hoodie is available on ILM! 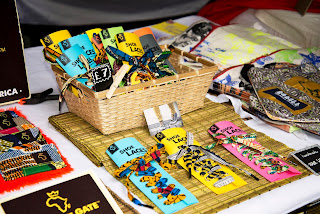 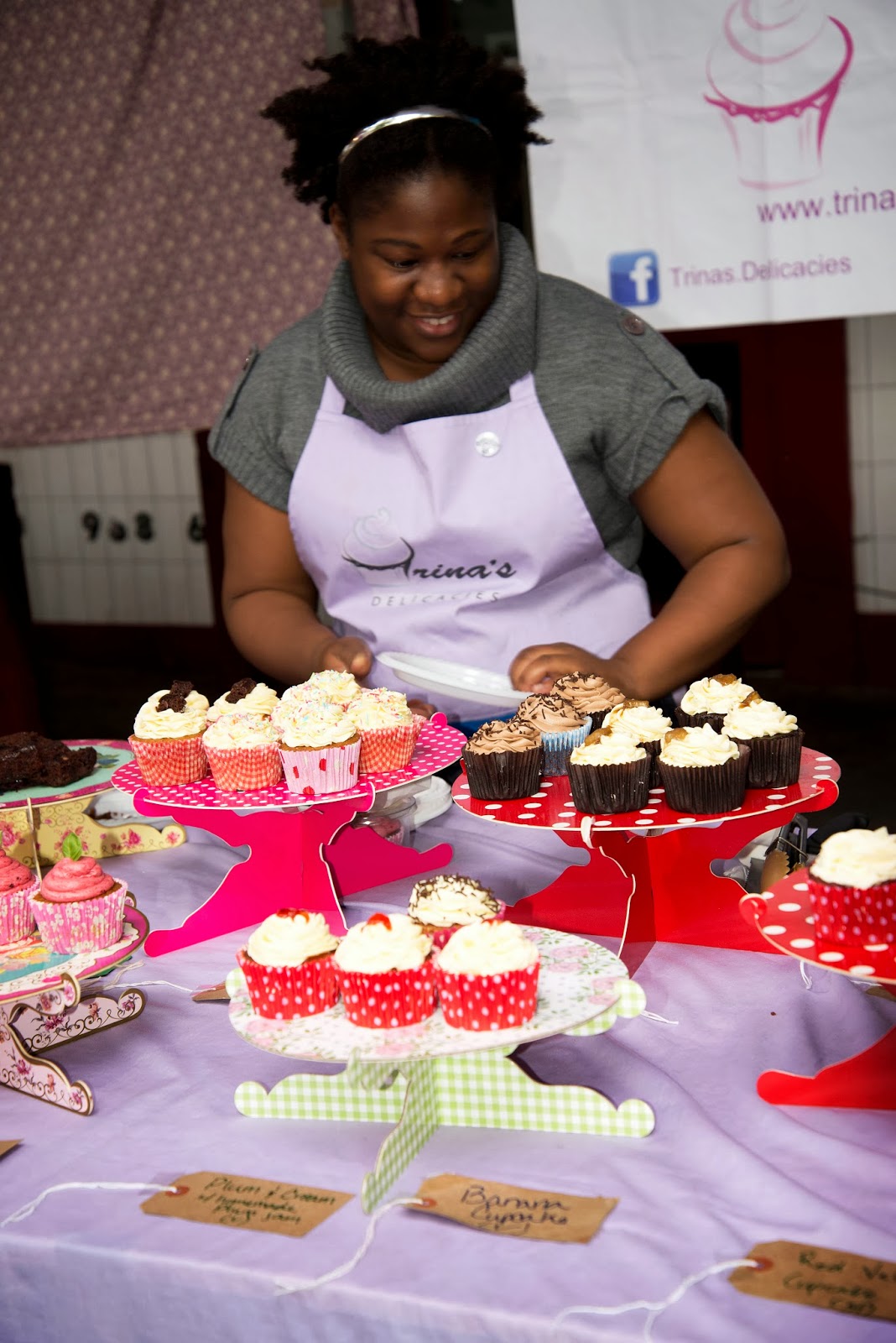 Trina's Delicacies was there to keep hungry sweet toothed market goers happy, and traders for that matter. She even managed to get her stall filmed in a sketch for an Italian comedian who were filming there.  Her brownie vanilla cupcake was amazing!
Portobello Rocks was a great success and  we are pleased to announce new dates for October, Novemer and December! Stalls are priced at an affordable  £45. Book your place fast to avoid disappointment! Sign up to I Love Markets and never miss another event again!

My Food Filled Visit to The Urban Food Fest

Last Saturday I paid a little visit to the lovely people at The Urban Food Fest. If you have never heard of it, it is London's newest street food night market and number 1 on Time Out London's Hot List. It features some of the best street food traders, a fully stocked bar, plentiful seating area with live music and entertainment also thrown into the mix.

It’s given me the hunger and I will defiantly be visiting again, this time on an empty stomach! Here are some of the lovely street food traders that kept all the eager, hungry and maybe slightly tipsy foodies happy.

The next Urban Food Fest is taking place on September the 7th. Check out our events calender for the full low-down of market action. This is a taster of what to expect!

The Crumbery makes and creates  handcrafted Pastries, Macaroons, Cakes and Confectionery.  Some conventional… some not so conventional. Unfortunately by the time I arrived most of what the Crumberry crew called conventional had been snapped up (rightly so).  I ended up faced with a Wasabi and Passion fruit macaroon. Now, I do not enjoy and therefore consume either of the ingredients, but after a few convincing words from there master-chef Vincent, which mainly consisted of “pretend it’s not passion fruit and wasabi.” I decided to go for it and you know what, it wasn't half bad! 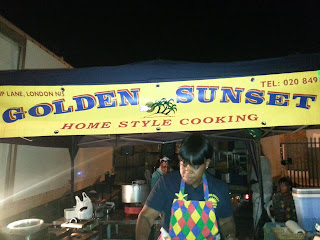 This family run business keeps to its traditional roots mainly selling rice and jerk chicken. Luckily they still had some remaining for me to try! The jerk sauce came with an amazing kick. I was being polite and just took a small portion, and yes… I live to regret the politeness. True home style cooking turned street food! 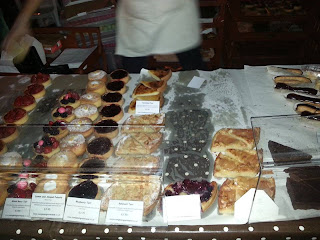 Comptoir Gourmand is a fast-growing traditional French patisserie company. They supply around 25 cafes around London, in addition to having 3 cafes of their own. Yet despite this they still have stalls in markets all over London including Borough Market, Spitalfields Market and Venn Street. When I popped to their stall the choice was impossible. After a lengthy decision, breaking the ‘oh no it’s still sunny in September diet’ and holding up the queue, I opted for a Vanilla Slice.  A decision I will never regret. Now I just need to visit and see them at the market for more tasty treats.

First thing to say about Streetzza is WOW! This monster/horse box/wood-oven was rolling out non-stop amazing pizza all night long. There was nothing but queues of hungry people constantly all waiting to taste the delights that a wood oven in a horsebox can make!

Portena, Portena, Portena… my favorite of the whole evening. I was lucky enough to arrive in time to a fresh batch of chicken and beef empanadas. To be entirely honest in my naivety, I wasn't entirely sure what I was eating. But I sure am glad I did. It was the most prefect, flavorsome easy to eat street food. My boyfriend insisted to go back and buy more! Also, to make my day even better the lovely chef told me they trade at Borough Market, YEY! As the I Love Markets are situated just down the road.

The Busan BBQ is an AmeriKorean food trader. They specialise in marrying American street food classica with Kaorean marinades to make awesome favour combinations. When speaking with them about their food and how it was made, these flavorsome feats sound enitrely unique to Busan. I'm still dreaming of trying their spiced pork belly burger now, i will be hunting them down at the next Urban Food Festival in hope of trying one! 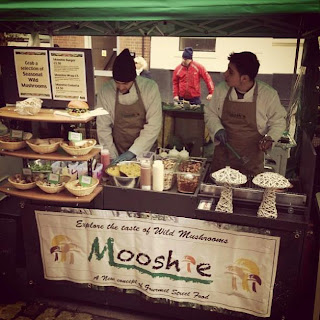 Mooshie is a new concept of Gourmet Street Food which showcases various types of Wild Mushrooms. If you are a mushroom and burger lover, Mooshie food is your dream. However not so much mine! Personally I am not a fan of mushrooms, however the Urban Food Fest people obviously were as they were fresh out when I arrived and their chef was on the run trying to sort out a delivery of more stock! Obviously an unusual and popular choice!